A handful of Warriors were in action at the Scottish youth track championships last weekend at the Sir Chris Hoy velodrome  with a clean sweep for Amber, Jenny and Rhona. Between them they won all the Scottish youth A girls titles. Amber, the pre race favourite for the sprint events, beat club mate Jenny by 0.2 seconds in the match sprint and went on to pip Jenny to the post  in the 500 m TT as well. 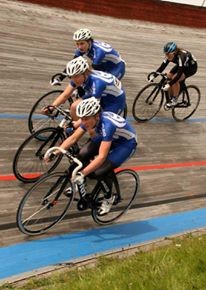 Rhona was the podium in the points And scratch races but saved her best till last, winning the 2 km pursuit by several seconds ahead of Jenny who by this time was ready, readyfor a wee seat having been busy in the ride offs for the match sprint.

Calum Reid was also victorious, winning the youth c boys Omnium and Logan MacLean, competed on the track for the first time at national level alongside Sandy Holl and Aaron King in the youth B boys and came away having learned lots of new tricks.

This weekend (4th - 6th July) of racing saw the trio of Amber, Jenny and Rhona travelling south to the finals of the British National Omnium with Rhona finishing 4 th, Jenny 5 th and Amber 18 th with Jenny being first across the line in the scratch along the way. Calum also made the journey to Wolverhampton and raced well alongside a competitive field.

Next up is next Sunday's British National youth road race round closed roads in Paisley city centre, so why not come along to support the clubs usual suspects in action against the country's best.